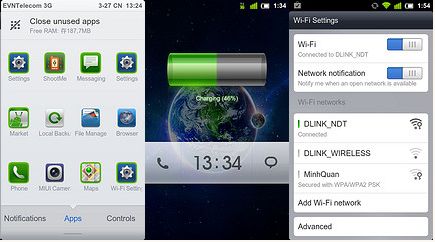 Recommended this week:
1. To messages automatically light up the screen, do not have to manually light the screen.
2. The camera shutter to support full-screen, you need to open the control panel, self super weapon.
3. Part of the solution charge state of the lock-screen phone slow heating problem (should be lock screen caused by inefficient charging animation)

Telephone:
– Restrictions on third-party applications optimized hang monitor the operation (the default is not allowed, such as the need to allow the phone set to open switch)
– Repair have missed calls and messages, LED color and frequency of the problem can not be set
– Fix select a contact when the call forwarding settings will crash issues such FC
– Fixed number of missed calls or messages will not eliminate the problem of LED
– Fix setting call forwarding, the number entry box will narrow the issues
– After the repair is sometimes hang up call button to answer the question does not appear
– Caller ID fix when the problem is too large lead FC

SMS:
– Add to messaging features will turn on the screen
– Repair failed mass function has been restored after re-issued
– Repair open signature, write text messages after the signature the default cursor problem
– Optimized MMS Open speed, compatibility, support open attachments
– Optimization of open sign, if not entered any content, prompting the former to send text messages
– MMS pictures automatically optimize session cut for the square to maximize the present
– Optimization of mobile newspaper added a page to read markers
– Click the MMS in the optimization of images, video to gallery view
– Optimized to improve the refresh mechanism recommended messages and to avoid empty categories

Contact:
– Added feature to delete duplicate contacts (in the contact-menu-remove duplicate contacts)
– Contacts to join the group can not fix the problem
– Modify the Caller ID fix when select a picture from the gallery will issue FC

Lock screen:
– Optimization of the lock-screen status bar is part of the image resource adjustments
– Optimization system does not integrate the desktop screen of a small plug-in key lock can be downloaded through the network of a key lock disc screen app
– State of repair to solve the lock-screen music need to press the play button twice problem
– Repair part of the solution state of the lock-screen mobile phone charging slow heating problem (should be lock screen caused by inefficient charging animation)
– Repair solution under lock screen text messages and phone calls can also see the problem

Topic:
– Add View Online wallpaper / ringtones added Select
– Add theme picker (through the theme chosen for the third-party app Audio controls) increased at the tone “default” entry, the default user-select the original audio
– Preview significantly enhance the local optimization of the open speed (due to the need to establish local index for the first time when there will be jammed open phenomenon, such as good will be faster indexing)
– Fix default theme the title of the custom items in the local problems do not appear
– Select a topic application packet repair module, the pop-up window display order and check the order of the module the problem of inconsistent
– Browse online wallpaper repair / ringtone will repeat when the problem of classification of items

Notes:
– After repairing the new notes input by home, to the desktop and then enter the notes issue will be blank notes (notes the contents of the saved)
– Add new notes to set the background color is a random switch

Other:
– Repair A2SD + script spent too long cause problems not available
– Overheating while charging animation fix the problem
– Repair set advanced settings in the effect of the problem can not be immediately displayed
– Move the desktop may fix the problem of dislocation

Best of the Week